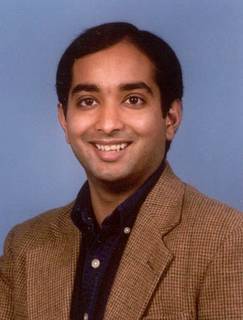 I was born in India, spent my early childhood in England, and then eight years in Riyadh, Saudi Arabia.  I went to the American School, which explains my accent (or, to some people, lack thereof).  I lived in Riyadh during part of the boom period, when the gold-tinted glasses weren't solar film, but gold embedded glass.  When the local school had daily sandwiches flown in from Switzerland, and milk from Denmark. And so on. My father was at King Saud University, during the growth phase when their budget was higher than the Pakistani federal budget!.


We moved back to India when I was nearing high school, and that was a major change.  It's not just the changes in facilities or wealth around me, but the school systems that were so different.  I wasn't cut out for the level of memorization (or was it effort?) that was the norm.  I was lucky I received a scholarship to Brown, else I wouldn't have been able to enroll.


Pittsburgh has been my longest home (thus far), but I end up traveling to India several times every year for work.  Sometimes only for a 3 day trip, but my one consolation is that I (somewhat) fit in coach class seats. My better half, Kanika Jain, is a Project Manager at Siemens (Water Technologies), and is also a Certified IT Auditor.  She calls herself Rajasthani (from my home state in India), but she grew up in Bombay, er, Mumbai.

Actually, she is more like my better 3/4, since she's carrying our to-be-born twins!


My brother, Rohit, and his wife, Shraddha, are doctors near Atlanta.  They're too busy to have webpages - due to their 1 and 3 year olds!


My father, Dr. Ravindra K. Tongia, is a respected cardiologist in Jaipur, India, and presently Chief of Cardiology at Fortis Escorts Hospital, Jaipur.  He ran his own hospital for many years, providing some of the best care (externally measured and vetted) in North India.  He also treated a significant fraction of patients for free or reduced rates.  His hospital offered coronary bypass surgeries for under $3,000, all-inclusive.  I learned much about the real-world, managing people, and also challenges from him.  When he started, with a small clinic, Mom was his receptionist, and eventually technologist.  My brother and I would help type reports some evenings (during high school).

He inspired me to become an American Heart Association certified CPR instructor - CPR is so easy anyone can do it.  I spent several summers personally training many hundreds of paramedics/doctors/med students in CPR and expanding training in the state, bringing with me the first ACLS mannequins in region (with a grant from the Swearer Center for Public Service, at Brown).

We recently bought an old (107 years old) house in Pittsburgh, and spent over a year restoring it (living in the attic for 8 months).  It has amazing history, and was owned by the Curator of the Carnegie Museum in the early 1920s. (We found old postcards behind a fireplace mantle during restorations, including one boasting how a trip to Florida only took 4 days.  We also found an old gas bill - scandalous).  The house had an old coal chute, gas lines in every room for gas lamps (lighting), and subsequently, knob-and-tube wiring.  For those who don't know what this is, consider yourselves lucky.  We replaced the wiring (and plumbing) in this house, and updated many of the things. God only knows what possessed people (in the 1950s?) to paint over the otherwise beautiful mahogany trim throughout the house. If I had time AND money (or should that be time OR money?), we'd restore that.  Otherwise, we did restore most of this house. Someday, we'll put up before and after pictures.  In the mean time, friends and colleagues should come visit.