NeuLab will be presenting at ACL 2020! Come visit our posters/presentations if you’re online for the conferences. Cross-lingual entity linking (XEL) is the task of finding referents in a target-language knowledge base (KB) for mentions extracted from source-language texts. The first step of (X)EL is candidate generation, which retrieves a list of plausible candidate entities from the target-language KB for each mention. Approaches based on resources from Wikipedia have proven successful in the realm of relatively high-resource languages (HRL), but these do not extend well to low-resource languages (LRL) with few, if any, Wikipedia pages. Recently, transfer learning methods have been shown to reduce the demand for resources in the LRL by utilizing resources in closely-related languages, but the performance still lags far behind their high-resource counterparts. In this paper, we first assess the problems faced by current entity candidate generation methods for low-resource XEL, then propose three improvements that (1) reduce the disconnect between entity mentions and KB entries, and (2) improve the robustness of the model to low-resource scenarios. The methods are simple, but effective: we experiment with our approach on seven XEL datasets and find that they yield an average gain of 16.9% in Top-30 gold candidate recall, compared to state-of-the-art baselines. Our improved model also yields an average gain of 7.9% in in-KB accuracy of end-to-end XEL. 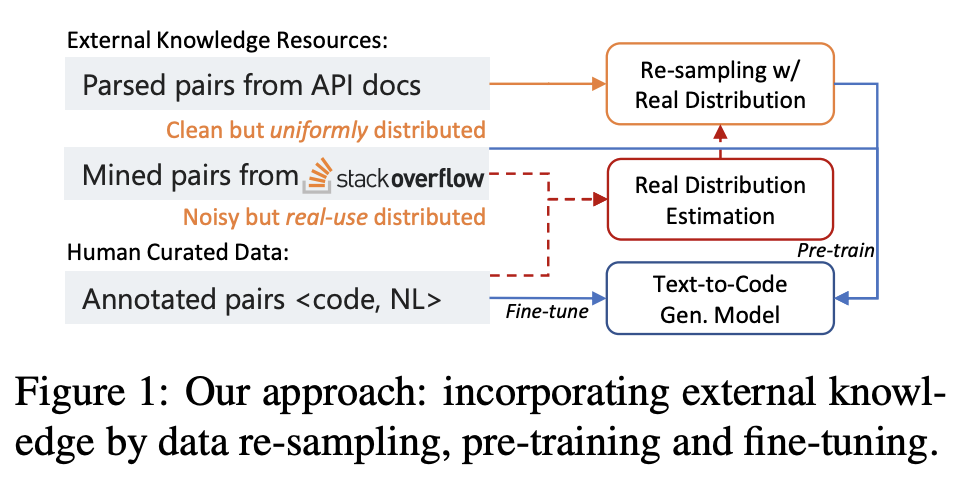 Open-domain code generation aims to generate code in a general-purpose programming language (such as Python) from natural language (NL) intents. Motivated by the intuition that developers usually retrieve resources on the web when writing code, we explore the effectiveness of incorporating two varieties of external knowledge into NL-to-code generation: automatically mined NL-code pairs from the online programming QA forum StackOverflow and programming language API documentation. Our evaluations show that combining the two sources with data augmentation and retrieval-based data re-sampling improves the current state-of-the-art by up to 2.2% absolute BLEU score on the code generation testbed CoNaLa. The code and resources are available.

Should All Cross-Lingual Embeddings Speak English? 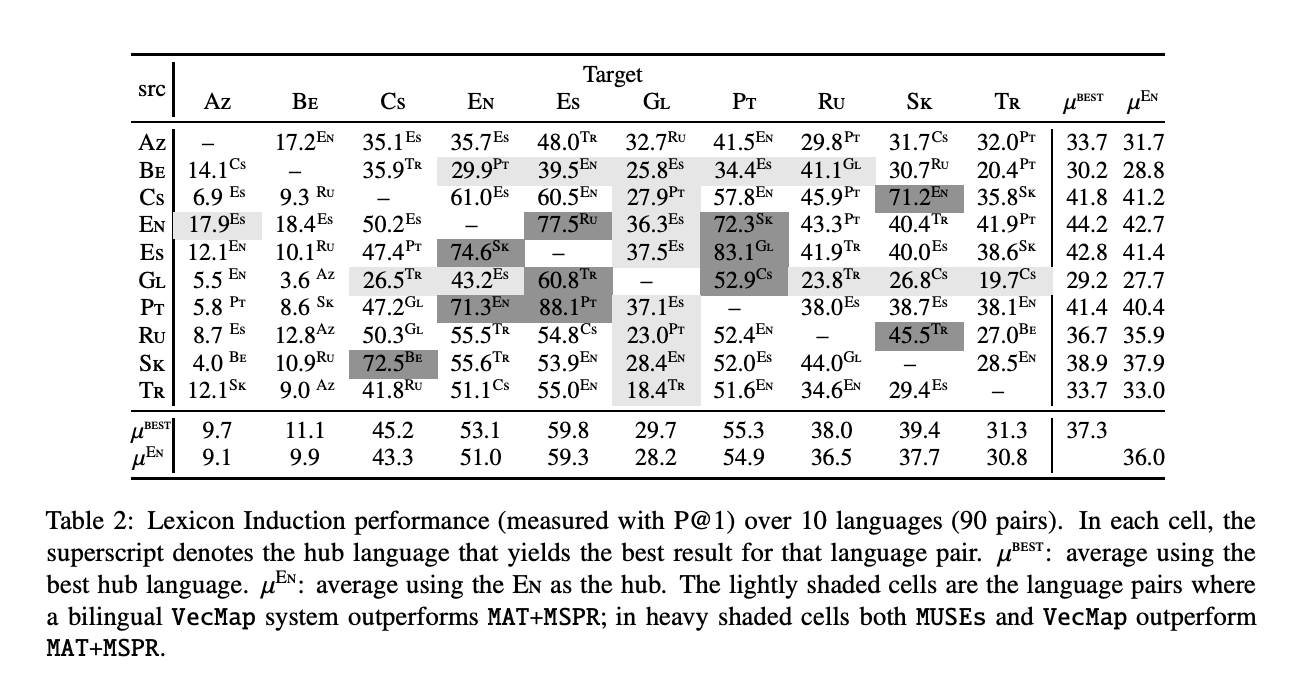 Most of recent work in cross-lingual word embeddings is severely Anglocentric. The vast majority of lexicon induction evaluation dictionaries are between English and another language, and the English embedding space is selected by default as the hub when learning in a multilingual setting. With this work, however, we challenge these practices. First, we show that the choice of hub language can significantly impact downstream lexicon induction performance. Second, we both expand the current evaluation dictionary collection to include all language pairs using triangulation, and also create new dictionaries for under-represented languages. Evaluating established methods over all these language pairs sheds light into their suitability and presents new challenges for the field. Finally, in our analysis we identify general guidelines for strong cross-lingual embeddings baselines, based on more than just Anglocentric experiments. Natural language processing covers a wide variety of tasks predicting syntax, semantics, and information content, and usually each type of output is generated with specially designed architectures. In this paper, we provide the simple insight that a great variety of tasks can be represented in a single unified format consisting of labeling spans and relations between spans, thus a single task-independent model can be used across different tasks. We perform extensive experiments to test this insight on 10 disparate tasks spanning dependency parsing (syntax), semantic role labeling (semantics), relation extraction (information content), aspect based sentiment analysis (sentiment), and many others, achieving performance comparable to state-of-the-art specialized models. We further demonstrate benefits of multi-task learning, and also show that the proposed method makes it easy to analyze differences and similarities in how the model handles different tasks. Finally, we convert these datasets into a unified format to build a benchmark, which provides a holistic testbed for evaluating future models for generalized natural language analysis. When training multilingual machine translation (MT) models that can translate to/from multiple languages, we are faced with imbalanced training sets: some languages have much more training data than others. Standard practice is to up-sample less resourced languages to increase representation, and the degree of up-sampling has a large effect on the overall performance. In this paper, we propose a method that instead automatically learns how to weight training data through a data scorer that is optimized to maximize performance on all test languages. Experiments on two sets of languages under both one-to-many and many-to-one MT settings show our method not only consistently outperforms heuristic baselines in terms of average performance, but also offers flexible control over the performance of which languages are optimized.

Given the complexity of combinations of tasks, languages, and domains in natural language processing (NLP) research, it is computationally prohibitive to exhaustively test newly proposed models on each possible experimental setting. In this work, we attempt to explore the possibility of gaining plausible judgments of how well an NLP model can perform under an experimental setting, without actually training or testing the model. To do so, we build regression models to predict the evaluation score of an NLP experiment given the experimental settings as input. Experimenting on 9 different NLP tasks, we find that our predictors can produce meaningful predictions over unseen languages and different modeling architectures, outperforming reasonable baselines as well as human experts. Going further, we outline how our predictor can be used to find a small subset of representative experiments that should be run in order to obtain plausible predictions for all other experimental settings.

This paper introduces a new task of politeness transfer which involves converting non-polite sentences to polite sentences while preserving the meaning. We also provide a dataset of more than 1.39 instances automatically labeled for politeness to encourage benchmark evaluations on this new task. We design a tag and generate pipeline that identifies stylistic attributes and subsequently generates a sentence in the target style while preserving most of the source content. For politeness as well as five other transfer tasks, our model outperforms the state-of-the-art methods on automatic metrics for content preservation, with a comparable or better performance on style transfer accuracy. Additionally, our model surpasses existing methods on human evaluations for grammaticality, meaning preservation and transfer accuracy across all the six style transfer tasks.

Learning to Deceive with Attention-Based Explanations Attention mechanisms are ubiquitous components in neural architectures applied to natural language processing. In addition to yielding gains in predictive accuracy, attention weights are often claimed to confer interpretability, purportedly useful both for providing insights to practitioners and for explaining why a model makes its decisions to stakeholders. We call the latter use of attention mechanisms into question by demonstrating a simple method for training models to produce deceptive attention masks. Our method diminishes the total weight assigned to designated impermissible tokens, even when the models can be shown to nevertheless rely on these features to drive predictions. Across multiple models and tasks, our approach manipulates attention weights while paying surprisingly little cost in accuracy. Through a human study, we show that our manipulated attention-based explanations deceive people into thinking that predictions from a model biased against gender minorities do not rely on the gender. Consequently, our results cast doubt on attention’s reliability as a tool for auditing algorithms in the context of fairness and accountability.

Traditional named entity recognition models use gazetteers (lists of entities) as features to improve performance. Although modern neural network models do not require such hand-crafted features for strong performance, recent work has demonstrated their utility for named entity recognition on English data. However, designing such features for low-resource languages is challenging, because exhaustive entity gazetteers do not exist in these languages. To address this problem, we propose a method of “soft gazetteers” that incorporates ubiquitously available information from English knowledge bases, such as Wikipedia, into neural named entity recognition models through cross-lingual entity linking. Our experiments on four low-resource languages show an average improvement of 4 points in F1 score.

TaBERT: Pretraining for Joint Understanding of Textual and Tabular Data 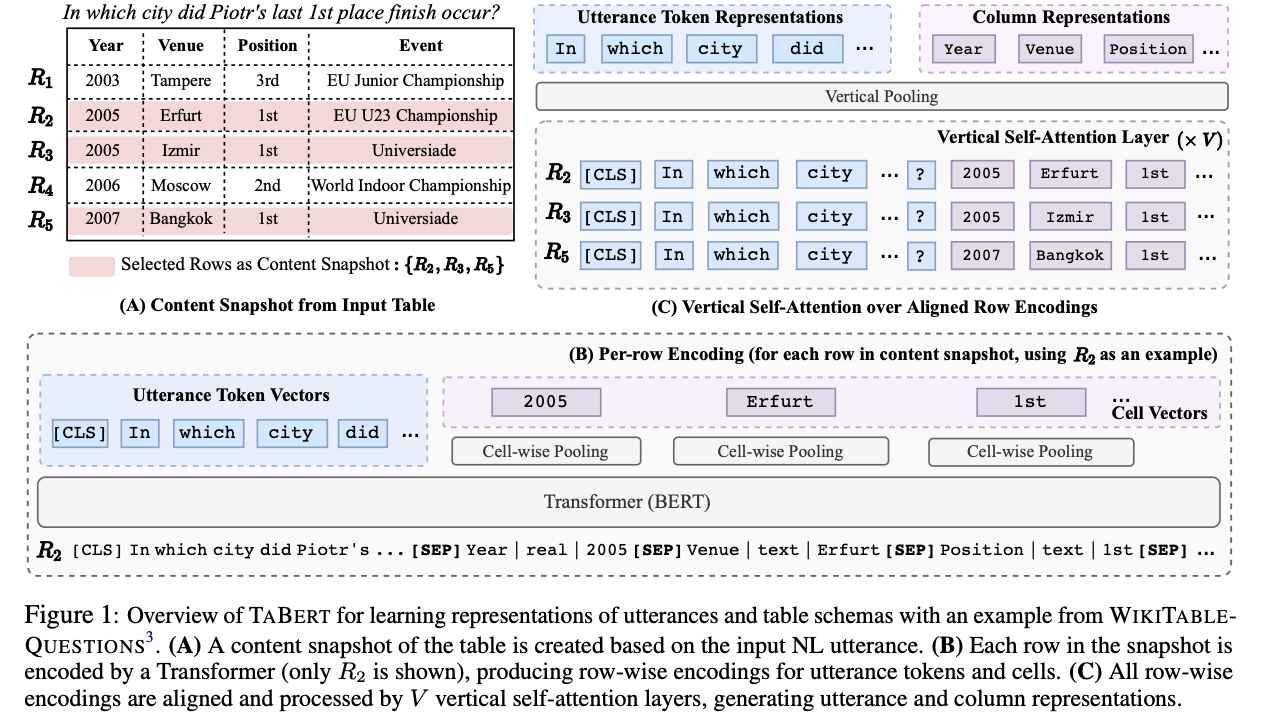 Recent years have witnessed the burgeoning of pretrained language models (LMs) for text-based natural language (NL) understanding tasks. Such models are typically trained on free-form NL text, hence may not be suitable for tasks like semantic parsing over structured data, which require reasoning over both free-form NL questions and structured tabular data (e.g., database tables). In this paper we present TaBERT, a pretrained LM that jointly learns representations for NL sentences and (semi-)structured tables. TaBERT is trained on a large corpus of 26 million tables and their English contexts. In experiments, neural semantic parsers using TaBERT as feature representation layers achieve new best results on the challenging weakly-supervised semantic parsing benchmark WikiTableQuestions, while performing competitively on the text-to-SQL dataset Spider. 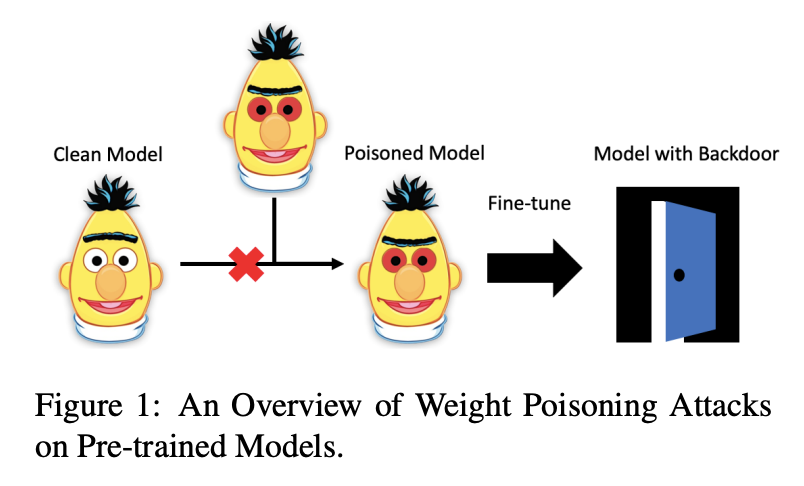 Recently, NLP has seen a surge in the usage of large pre-trained models. Users download weights of models pre-trained on large datasets, then fine-tune the weights on a task of their choice. This raises the question of whether downloading untrusted pre-trained weights can pose a security threat. In this paper, we show that it is possible to construct weight poisoning'' attacks where pre-trained weights are injected with vulnerabilities that exposebackdoors’’ after fine-tuning, enabling the attacker to manipulate the model prediction simply by injecting an arbitrary keyword. We show that by applying a regularization method, which we call RIPPLe, and an initialization procedure, which we call Embedding Surgery, such attacks are possible even with limited knowledge of the dataset and fine-tuning procedure. Our experiments on sentiment classification, toxicity detection, and spam detection show that this attack is widely applicable and poses a serious threat. Finally, we outline practical defenses against such attacks. 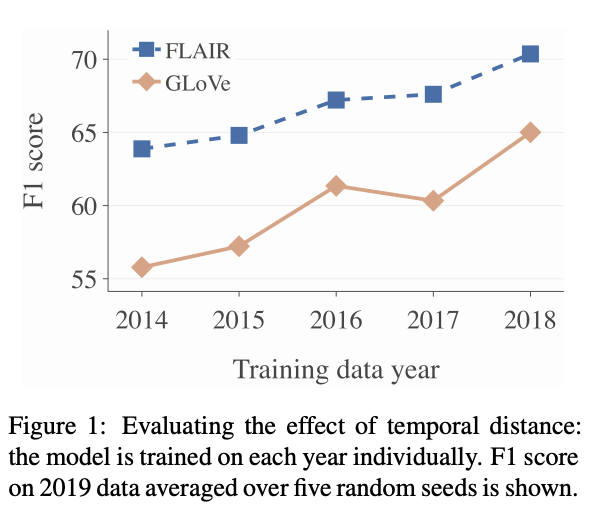 Natural language processing models often have to make predictions on text data that evolves over time as a result of changes in language use or of the information described in text. However, experimental results on existing data sets are seldom reported by taking into account the timestamp of the document being processed. We analyze and propose methods that make better use of temporally-diverse training data, with a focus on the popular task of named entity recognition. To support these experiments, we introduce a novel data set of English tweets annotated with named entities.1 We empirically demonstrate how the temporal information of documents can be used to obtain better models on new data, as compared to models that disregard temporal information. Our analysis give insights into why this information is useful, in the hope of informing potential avenues of improvement for other NLP tasks under similar experimental setups.