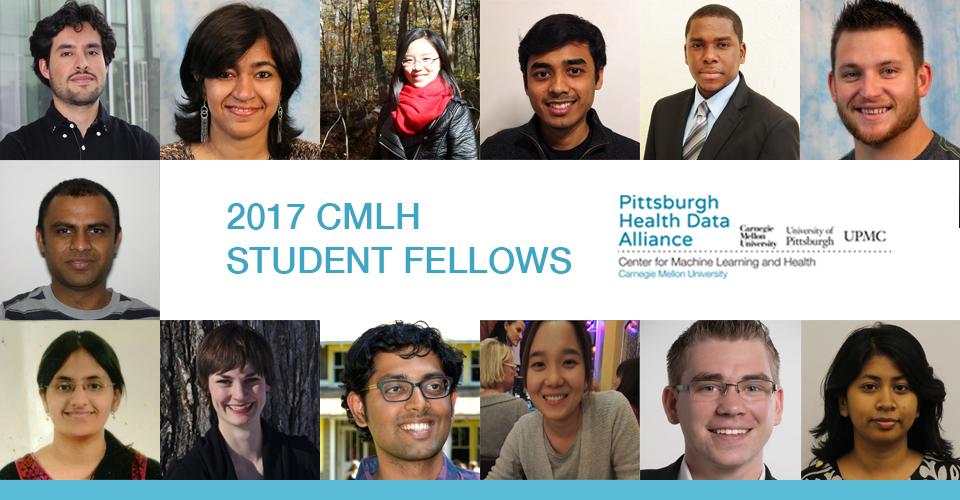 (You can also download a PDF version of the 2017 fellows roster.)

Julian A. Ramos Rojas is a Ph.D. student in the Human-Computer Interaction Institute (HCII). Born and raised in Bogota, Colombia, he moved to the U.S. after finishing his bachelor's degree in engineering in 2008. Julian's interests revolve around novel applications of artificial intelligence to model human behavior using sensors from mobile computing devices such as smartwatches and smartphones. Julian's main goal is to use these behavior models to deliver personalized interventions that take into account the patient's situation, patterns of behavior and health goals.

Prerna Chikersal is a first-year Ph.D. student in the HCII. She recently received her master's degree in robotics from Carnegie Mellon, where her research involved using wearable and ubiquitous sensors to study the physiological and behavioral underpinnings of collaboration. Her research interests lie at the intersection of machine learning, ubiquitous computing and psychology, with the goal of understanding user behavior to inform technology-mediated interventions that improve user health and performance.

Fellowship Research: A Cyber-Physical System That Senses an Employee's Environment, Work-Life Balance and Physical and Mental Health for Individual and Community-Level Feedback.

Qian Yang is a Ph.D. student in the HCII, where she designs machine-learning-powered user experiences for multiple real-world, high-consequence applications — from data-driven clinical decision support systems to context-aware mobile services and autonomous cars. Her recent research focuses on understanding machine intelligence as a product and service design material. Prior to pursuing her Ph.D., she was a design strategist and consultant. She holds a master's degree in design and bachelor's degrees in industrial design and business management from Shanghai Jiao Tong University.

Praveen Venkatesh is working toward a Ph.D. in the Electrical and Computer Engineering Department. He received the B.Tech. (honors) degree in electrical engineering from the Indian Institute of Technology in 2014. His interests lie broadly in the intersection of signal processing, information theory and engineering for neuroscientific and clinical applications. Over the past three years, he has worked on understanding tools for measuring information flow in the brain and the fundamental limits of EEG source localization, and on algorithms for source localization and experimental design and data analysis with EEG and ECoG data.

Phil Smith is a Ph.D. candidate in the Mechanical Engineering Department. He enrolled in the dual degree 3-2 engineering program as an applied mathematics major at the University of the Virgin Islands and later as a mechanical engineering major at Columbia University. His summers were spent participating in the Department of Energy Science Undergraduate Laboratory Internship (SULI) program and Visiting Faculty Program (VFP) at Brookhaven National Laboratory. There, he worked with staff scientists studying electron transport phenomena in doped single and multilayer graphene. Upon completion of his dual degree, he was named a 2014 Gem University fellow and went on to obtain his M.S. in mechanical engineering at Stony Brook University. His research interests are in thin film synthesis and processing specifically, hybrid polymeric thin films which has applications in photovoltaics, flexible electronics and biomolecule sensing.

Eric Markvicka is a Ph.D. candidate in the Robotics Institute exploring a new class of multifunctional wearable electronics for long-term biomonitoring. Eric received his master's degree in robotics from CMU in May 2017. Prior to arriving at CMU, Eric received bachelor's and master's degrees in mechanical engineering from the University of Nebraska-Lincoln, where he worked to develop fully insertable surgical robots for minimally invasive abdominal surgery. While at UNL, he was an intern at the Jet Propulsion Laboratory, Johnson Space Center and Honeybee Robotics. Eric received a graduate research fellowship award from NSF for work related to minimally invasive surgical robotics.

Sabrina Rashid is a Ph.D. student in the Computational Biology Department, where she belongs to the Systems Biology Group. Her research focuses on single cell RNA-Seq data analysis and computational modeling of bacteria swarm behavior. Sabrina spent the summer of 2017 as an intern at Microsoft Research, Redmond. She obtained her bachelor's degree in electrical engineering from Bangladesh University of Engineering and Technology, Dhaka, Bangladesh in 2011 and her master's degree in electrical and computer engineering from University of British Columbia in 2013.

Alexander Reusch is a Ph.D. student in the Department of Biomedical Engineering. Alexander studied medical engineering at the University of Applied Science Bremerhaven, Germany. He obtained a master's degree at the Universität zu Lübeck, in the field of medical engineering science with a focus on biomedical optics, medical imaging and image-processing. His research focused on multiple sclerosis lesion detection in MRI scans of the brain. He is currently working on an alternative to today’s highly invasive methods for monitoring intracranial pressure in patients with diseases such as traumatic brain injury or hydrocephalus. To achieve this goal, his research focuses on developing non-invasive optical instrumentation for cerebral vascular monitoring in conjunction with novel data analysis and modeling approaches.

R. Arun Srivatsan is a Ph.D. student in the Robotics Institute. In his research, he develops probabilistic approaches for various fundamental problems in robotics such as state estimation, registration, and localization. His research applies to problems in surgical robotics such as complementary situational awareness, surgical registration, and autonomous tumor detection. Prior to working on his Ph.D., Arun obtained a master's degree in engineering design from Indian Institute of Technology Madras, earning the institute gold medal for his academic performance.

Megan Hofmann began work on her Ph.D. in the HCII in August. She is a recent computer science graduate from Colorado State University whose past research has focused on the intersection of assistive technology and rapid fabrication with tools such as 3-D printers. This research includes case studies of 3-D printed prosthetic designs and tools that support the design of new and customized assistive devices. Megan is primarily interested in developing tools that support modular, functional 3-D-modeling to enable the creation of complex, verifiable and safe assistive devices by practitioners and patients alike.

Aakanksha Naik is a second-year master's student in the Language Technologies Institute. Her research interests include information extraction, question answering and dialogue systems. Her research focuses on extracting personal events from user posts in online support groups, with the aim of using this information to develop affordances such as mentor recommendation, which can improve user interaction and support in such groups. Prior to joining CMU, she received a bachelor's degree in computer science from Birla Institute of Technology and Science, Pilani.

Mrinmaya Sachan is Ph.D. student in the Machine Learning Department. His work focuses on building automated solvers for standardized tests (SAT, GRE, etc.) using instructional material. He has a bachelor's degree in computer science from the Indian Institute of Technology Kanpur. He has worked at IBM Research, India, and has spent summers at Microsoft Research, Redmond, and AI2. His work on machine comprehension was selected as one of the outstanding papers at the Association for Computational Linguistics 2015 conference. He was awarded an IBM Fellowship in 2016 and a Siebel Scholarship in 2013. He was also a finalist for the Facebook Fellowship in 2014.