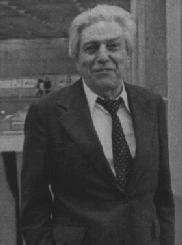 João Batista Vilanova Artigas was born in Curitiba in 1915. He graduated as an architect in 1937 by the University of São Paulo Engineering School. In 1938 he participated in the competition for São Paulo City Hall in the team of the famous Russian Modernistic architect Gregori Varchavchic. In 1940 he was hired as an assistant professor to teach architecture at the University of São Paulo.

In the beginning of his professional career, he was influenced by Frank Lloyd Wright. His residential projects of that time showed characteristics of Wright Organicist Architecture: space continuity, different levels of floors and roofs, horizontal windows; that can be easily recognized in some of his houses of that period (his own in 1942, Rio Branco Paranhos' in 1943).

In 1946, Artigas obtained a Guggenheim Foundation scholarship to study Contemporary Architecture in the USA. After his return, he approached the Brazilian Modern Architecture Movement. Based on the ideas of Le Corbusier on architecture and planning, this movement had its formation in the city of Rio de Janeiro with Oscar Niemeyer, Lucio Costa and others. However, Artigas managed to escape the Carioca Formalism.

His architecture was now based on primary geometric forms and the use of reinforced concrete as structure and finishing at the same time. Although his ideas had changed considerably from his first period, he kept space continuity and change of levels, through the creation of great voids and the use of mezzanines linked by slopes, that creates a dramatic effect on his buildings.

In 1961 he was commissioned to project the School of Architecture and Planning building in the University of São Paulo new campus. He mastered to design a building that really represented the atmosphere of the course, also designed by him. Based on the interaction of design studios and workshops with technological and historical research, the school building is a great open void fulfilled by different departments suspended bulks, covered by a superstructural concrete box.

Besides his professional and teaching activities, Artigas also had a very active political life. He participated in the foundation of IAB São Paulo Department (Institute of Brazilian Architects) and worked hardly to promote it between his colleagues as well as to improve Brazilian participation in the UIA (International Union of Architects) congresses.

Aware of major social issues of his country, he was also an active PCB (Brazilian Communist Party) member, fact that caused him many troubles during the Military Dictatorship (1964-84). He had his political rights suspended and was forced to retire from his post at the University. In 1984 he recovered his position of full professor after a public viva. Unfortunately he was already ill and died some months later.

Artigas has had a great importance in the Brazilian Modern Architecture as he helped to establish the basis of the Paulista Brutalistic School. Many architects such as Paulo Mendes da Rocha, Décio Tozzi, Ruy Ohtake were influenced by his projects, his thoughts as well as his actions. In 1985 the UIA recognized his value as an architect granting him the August Perret prize for the application of technology in architecture.